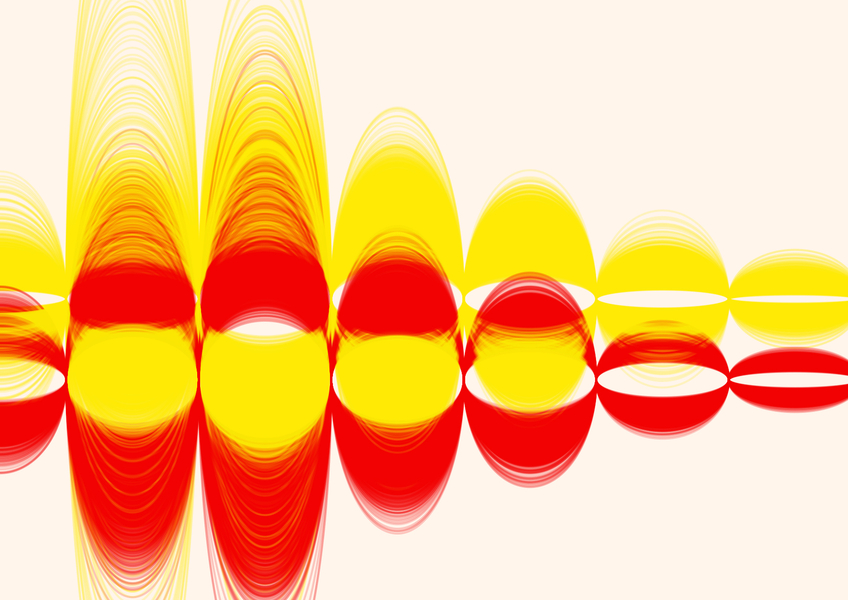 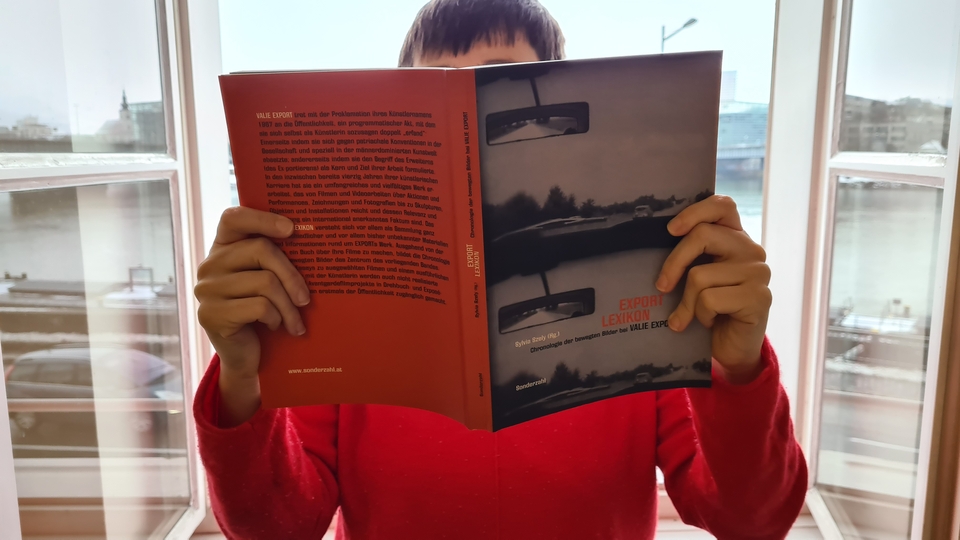 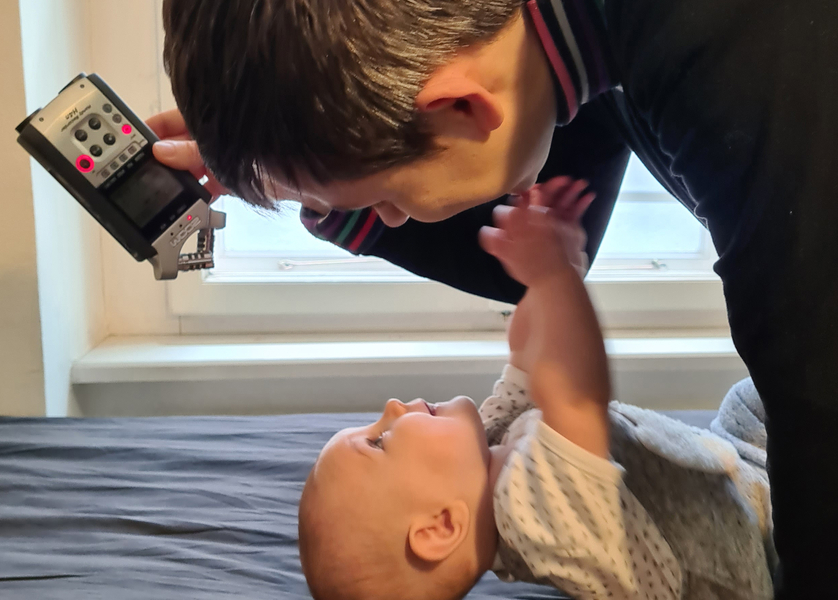 Image 1: Frame extracted from the running software Binômio: coincidir (2021). Source: Artist´s personal archive.
Image 2: One of the books on VALIE EXPORT´s artworks found at the library of Atelierhaus Salzamt. Photo by Jörg Klenk
Image 3: Documentation of the audio recordings conducted at the Atelierhaus Salzamt for the project Is this a conversation?, integrating the Binomial artwork series. Photo by Jörg Klenk

Almost ten years later I am back to Atelierhaus Salzamt in a completely different situation, this time not only with the goal to develop a specific artwork, but also to pave the ground for moving to the city, as junior research fellow of the VALIE EXPORT Center, in partnership with the Kunstuniversität Linz. In the company of my daughter and my partner, it was an intense staying: I kept the routine of the audio recordings to compose the data set for the ongoing project Is this a conversation? (see description below), participated in the workshop Konversionen. Kunst und Theorie at the Kunstuniversität Linz, I hold the lecture Relational Marginalities: Media art and the grounding inequality-conviviality relationships in Latin America, and started in person the work at the VALIE EXPORT Center. In between there was also time for searching for a flat, networking, reconnecting with the city and some old friends, as well as getting impregnated with the fruitful environment that Linz is for creative processes.

Binomial / Binômio (2021- ) is an ongoing series of artistic experiments articulated from different elements collected since my recent pregnancy, addressing issues arisen along the motherhood experience. Among the collected materials there are audio samples recorded from the belly (heartbeats, placenta, veins flux, etc…), so as the sounds of the baby after birth, interviews with mothers and artists from different profiles, stamps of the placenta, data collected from the glycemic control of the gestational diabetes, among others. The experiments interlace material and symbolic relationships of affection, intimate and universal aspects, conviviality and inequalities – between subjects, organic and machinic elements, etc.

One of the experiments has been Binômio: coincidir (2021), which consists of a Processing code written in Python mode enabling the visualization of the coincidences between mother and fetus´ heart beat spectral frequencies.

This piece has been one of the basis to the still work-in-progress installation Binômio: gestar e parir, that explores the challenging 9 stages related to gestating and giving birth – 9 months and 9 cm dilatation. The installation is assembled as a spiral of loudspeakers with proportional increase in size, and the last 10 cm station is a lamp, which blinks according to the coincidences of mother and baby´s heart beat frequencies. The spacialized soundscape develops from these coincidences, providing in each station an atmosphere of the corresponding gestational months.

In parallel, based on the audio data set collected since the gestation and throughout the first year of the baby, an AI-based soundscape called Binômio: Is this a conversation? is being developed, in partnership with artist and researcher Gabriel Francisco Lemos. The investigation is oriented towards the developing of uncanny sonorities that are beyond mere mimetic and pattern replication that usually dominate the applications of these technologies. In this specific context, our current lines of research are based in the use of sound as a metaphor to connect human and non-human bio linguistic agency using DIY and custom-made sets of hardware and software. Hence, looking beyond the current fetishist optimism in machine learning applications of style transfer and other techniques, our interest in neural networks is on its autopoiesis and sonic emergence possibilities.

Lastly, technically less complex experiments but relevant to the artistic research itself have been Binomial: interface (2021), a mixed techniques print suggesting the placenta as an interface organ between pregnant and baby, and complementary, the work-in-progess Binômio: diabetes, a luminous sculpture that simulates this interface from data collected for the glycemic control along pregnancy.

Her artistic work – fascination and intention…

As a female Latin American media artist and researcher, I often experience how male-dominant the art and technology environment is. Stimulated by my recent experience on motherhood, I recently started approaching more directly technofeminism. While researching on media artworks related to motherhood, I realized that this has been a neglected or surprisingly few discussed topic within both feminist movements and technofeminist art practice. In this sense, the ongoing artwork series is about populating the media art field with an unusual imaginary contribute to reduce gender and other identity gaps in the field. Preliminary reflections on the absence of motherhood as an issue in media art does not indicate lack of affection inherent to machinic aesthetics, it refers rather the lack of imaginary variability.

Intrigued by the aforementioned facts, the Binomial artwork series is meant to integrate a genealogy of motherhood in the technofeminist art and culture, to be build in dialogue with VALIE EXPORT´s artworks, as part of my post-doctoral research at the center. The next years I will dedicate to investigate how her artworks relate to contemporary media artworks, addressing intersectional voices of technofeminism, post-humanism and the inseparability between nature and culture. Among the orienting artistic-scientific questions are: How do (media) artists respond to the changes in (techno)feminist movements? What has changed in the artistic expressions since the iconic feminist artworks by VALIE EXPORT? What are the current feminist issues in the media art context and what are the subjects/identities behind them? How do we articulate common symbols, materialities and alternative narratives in relation to motherhood and post-human bodies?