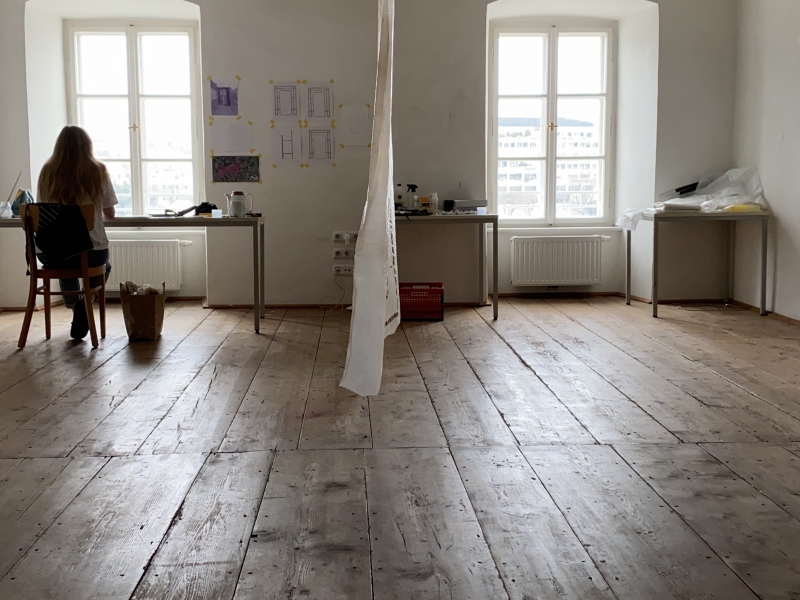 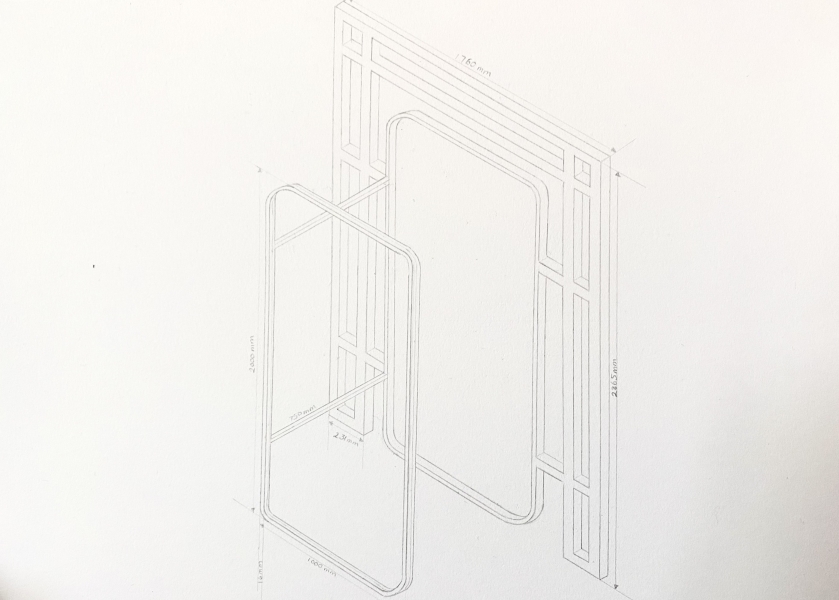 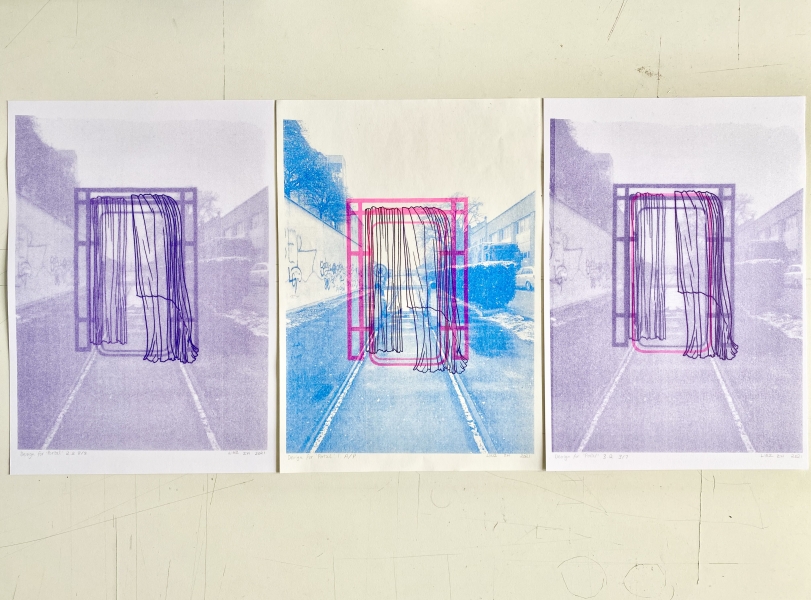 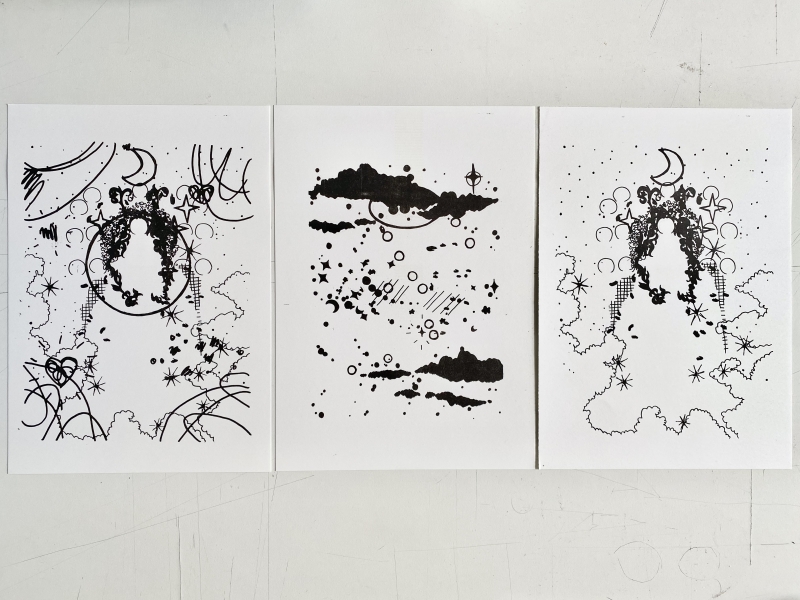 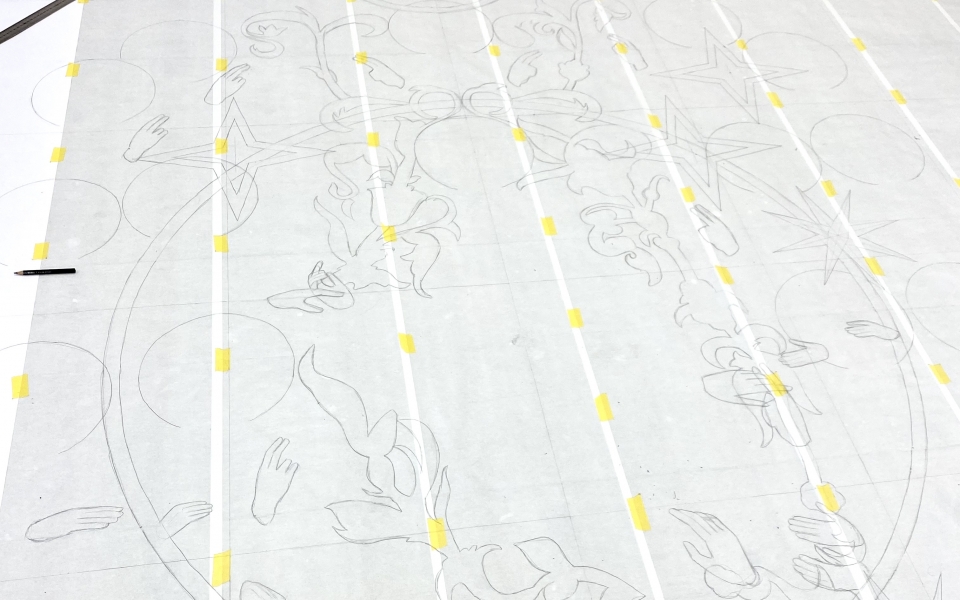 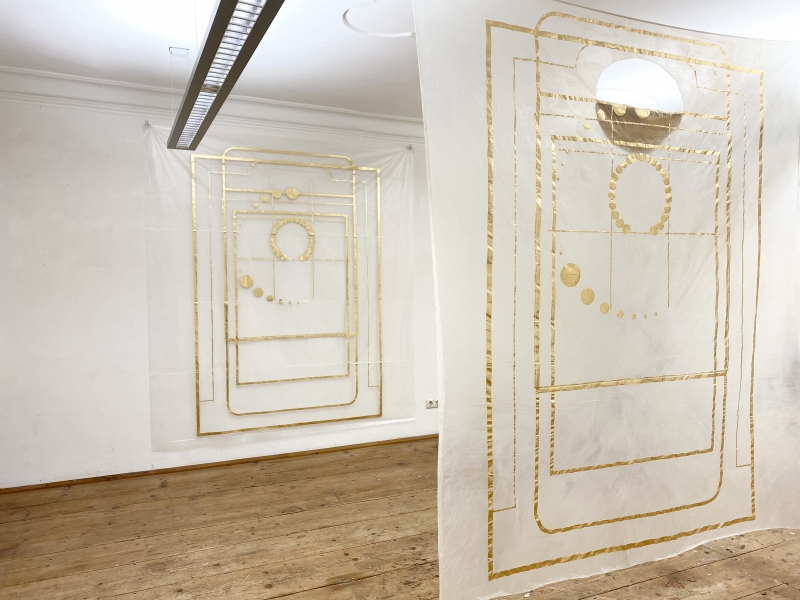 During my stay at the Atelierhaus Salzamt I have been developing a new piece of work titled ‘Portal’ for the forthcoming festival LINZ FMR – Art in Digital Contexts and Public Spaces. The current design for ‘Portal’ comprises of a sculptural frame-like structure and a draped gilded work on polythene. In my most recent plans, the sculptural element of the work consists of three frames, appearing like doors or archways; gilded with imitation gold leaf and one of which will be lit with pink neon lighting. The ‘painting’ element of ‘Portal’, which I am working on at present, is made by gilding imitation gold leaf onto large polythene sheeting to create partially-transparent diaphanous paintings which can be draped or hung. My initial plan is to drape these ‘paintings’ over the sculpture, however I may install the paintings independently when I come to the final public exhibition.

Both the sculptural and pictorial elements of the work blend forms and imagery derived from religious icons, selfie-filters and smartphones. For example, the design of the sculptural frames echoes the bezel of an iPhone and the compositional inclusion of an archway to frame the depiction of a miracle in a Russian Orthodox icon from the British Museum’s collection. In the gilded paintings, elements such as hand gestures, haloes and decorative features from religious icons are tangled amongst augmented reality adornments from selfie-filters.

Through this combination of imagery borrowed from the sacred and the profane, both the sculptural and the painterly elements of ‘Portal’ allude to the promises of proximity offered by both icons and handheld, networked devices. One offering us proximity to the divine, and the other offering us proximity to people, places and events geographically and/or temporally absent. The forms and decorative features which I have appropriated from icons, smartphones and social media all orbit intangible bodies which in their original contexts are conveyed to us respectively as painted and digital faces – mirages; representations, recognisable but not real.

In my expanded practice I am interested in values, beliefs and meaning-making in contemporary (secular) experience, and lately have been focusing on notions of presence in digital cultures. Hand gestures, like those of the icons referenced in the painted element of ‘Portal’, have appeared in previous works such as ‘Prayer Hands (iPad poses)’ created as part of Yorkshire Sculpture International Festival in 2019. And, ‘Quotations I, II & III’ (2018-19): in which hand gestures from religious art, emojis, and photos of food on Instagram were brought together in a triptych of gilded works on paper, which then acted as a choreographic score for a series of performance to video for Instagram pieces. During my stay at the Atelierhaus Salzamt I have also completed a diptych titled ‘Thresholds’ which I had thought I might incorporate into my work for LINZ FMR Festival, but have decided to keep as a distinct piece of work. I have also had the pleasure of working with the artists from Potato Publishing, who currently have an exhibition and workshop in the Gallery Space at Salzamt, and have introduced me to risograph printing so that I have been able to produce several short print series of my planned designs for ‘Portal’.

Image 1: Zara Worth in Studio 7 at Atelierhaus Salzamt, Linz, March 2021

Image 2: Scale drawing of plans for the sculptural element of ‘Portal’, designed for LINZ FMR 2021

Image 3: Risograph prints of the proposed design for ‘Portal’

Image 4: Risograph prints of designs for the gilded paintings for ‘Portal’

Image 5: Work in progress – sketching out at scale the design of one of the gilded paintings