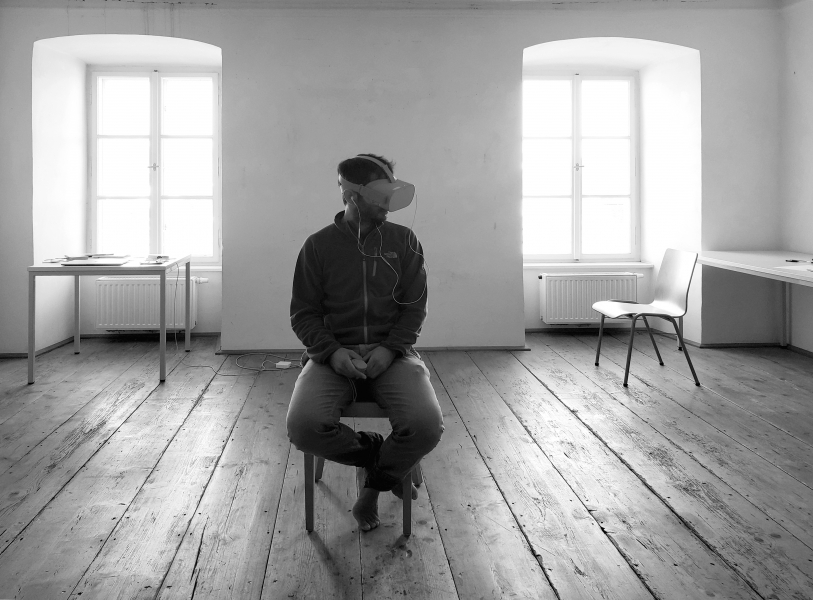 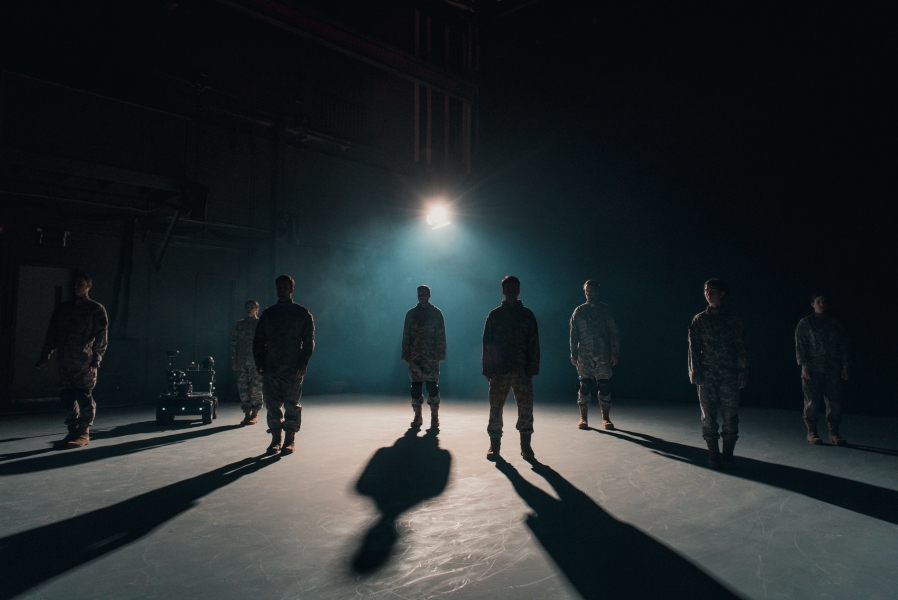 Current interactions between humans and new technologies are transforming our behaviors and influencing the way we are and act. I am interested in two aspects of these complex relationships that we are developing: our behaviour through a logic of animism and the transformation of bodies in human-technology relationships. Therefore, the installation resulting from my research maintains a close relationship with the body and the touch.

Phantom limb, social robots, military robots – what is interesting for Chélanie Beaudin-Quintin about these topics

The research carried out during my residency in Salzamt for the project entitled Phantom Sensations explores the meaning of touch through a tactile environment and a 360° film designed for virtual reality headsets. It is a reflection on the body in relation to new technologies.

This research-creation project allows me to think the body in the relationships between humans and new technologies. I explore the 360° film with a tactile environment, with an immersive installation soliciting the spectator’s body. In virtual reality, the user is at the interstice of two worlds: his body remains in the real world, while his senses of sight, hearing and sometimes even touch, taste and smell are stimulated by an immersive virtual universe. This can lead in the words of the anthropologist Thomas Maschio to “cognitive dissonance”. By disappearing, the user’s body can cause the sensation of a phantom limb, a phantom body. Through these explorations, I am interested in the relationships between humans and new technologies, as well as recent reflections on technological animism. Driven by the desire to explore this subject in greater depth, I have created an installation that oscillates between art and sociology, between scientific discourse and metaphorical interpretation, between human and technology. My theoretical research is in the fields of anthropology, philosophy and robotics; my creative research combines performance, installation and 360° film.

Experiences made during the Residency

This residency was a great opportunity to carry out several explorations essential to the realization of a bigger project, an installation and a 360° film. I have filmed 360° movies exploring the relationship between sight, through film, and touch, through installation. I filmed several performing actions to study the effects of the visual and tactile correspondence of textures and inversely of the sensory rupture between what is seen and touched.

Here are some ideas explored during this residency:

– The narrative approach of the 360° film

The narrative space of virtual reality and the scriptwriting work must be reflected differently from that of traditional film. Since the viewer is placed in the center and lives a personal experience of space, he is invariably surrounded by an environment and therefore the notion of framing and off-screen are transformed. For the theorist Benjamin Hoguet, the space of virtual reality has an emotional value and emotion would prevail over narrative. The narrative is easily overshadowed to the detriment of exploring the immersive space. Thomas Maschio, thus speaks of “storyliving” as opposed to “storytelling”.

The point of view imposed on the viewer, in a virtual reality experience, determines the place he occupies within the work. The participant, when placed in a subjective position, can go through an “identification process”; he can identify himself with the other, object or living, while keeping an awareness of his own identity, while assuming his own subjectivity. This identification process implies an idea of “double unity”. The user, while remaining himself, has the ability to be, to see and sometimes to choose. He is placed in a position of physical and emotional vulnerability.

– The different states of the body

The spectator who is placed at the heart of my 360° films serves as an agent linking the different states of the body in its relationship to technology, in its disappearance and reconstruction. It subjectively connects various bodies, which makes it possible to weave a promiscuity between one’s body, that of the performer present in the film and that of the one who is transformed in contact with different interfaces. Technology is the extension of our contemporary bodies, it acts as a physical and intellectual prosthesis.

By superimposing a tactile experience (in the real world) to the visual experience of the film, I experience the viewer’s sensory system. In this way, I explore a polysensoriality to exacerbate the place of the somatic.